A most important tradition at Christmas time in Mexico is that of the posada (Inn) – a re-enactment of the journey of Joseph and Mary on their way to Bethlehem and their search for a place to lay their heads. Presented to Mexico by Spanish missionaries as a part of their plan to convert the Aztec population to Christianity, particularly the Catholic doctrine. 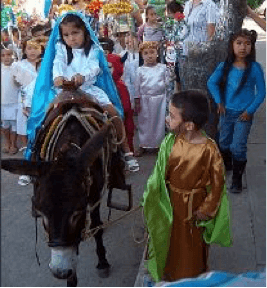 Mary, seated on a donkey, and Joseph, dressed in robes, lead the parade accompanied by angels and shepherds – characters most often played by children, sometimes displayed as ceramic figures carried on a platform. Originally, the procession would stop at homes, knocking on the door and begging for shelter. Nowadays in Ajijic, the parade will wind its way to a designated place, usually a restaurant, where they are welcomed and that’s when the party begins! 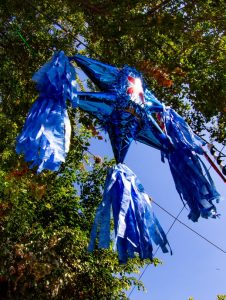 Piñatas are a big feature of the posada party and while they come in all shapes and sizes, the Christmas piñatas are star shaped with seven spikes, representing the seven deadly sins and 10 pointed ones, the sins of breaking the Ten Commandments.  The bright shiny paper signifies Satan’s tempting of man with false splendor, the blindfold denotes blind faith, the stick represents love and the breaking of the piñata symbolizes the defeat of evil, with the treats that spill out of the piñata being the rewards for the faithful. Many Mexicans no longer think of the religious meaning of the piñata and is mostly just a fun thing to do, especially for the children. 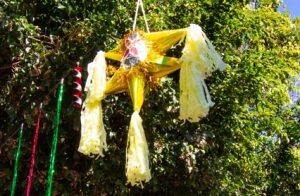 At the party, the piñatas are hung onto a rope and pulley system which an adult lowers near to the child then jerks higher each time the child goes to swing the stick at where he/she thinks the piñata is, and of course, misses but keeps on trying, egged on by an enthusiastic crowd! 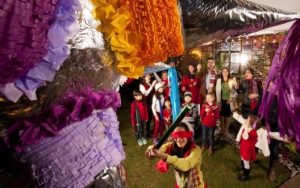 Meaning shepherd’s play, is the story of the Nativity, presented by the missionaries as another means to familiarize Mexicans with Christian beliefs. The play is about a group of shepherds who, after being visited by an angel, follow the Star of Bethlehem to find the Christ child.  Along the way, they’re confronted by a group of devils with Lucifer as their leader. This evil group attempts to stop them from reaching their goal by coercion and temptation. Luckily, the archangel Gabriel intervenes, defends the shepherds and helps them to reach the stable where they find Mary and Joseph with their newborn baby Jesus lying in a manger. The cast of the play is rounded out with a few sheep and a burro or two! 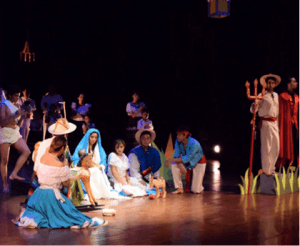 The pastorelas of old were a serious event and have evolved into a far more light-hearted performance, with jokes, witticisms and political references thrown into the script. In larger cities, the pastorela may be performed in a theatre or auditorium, while in smaller villages the play can be seen in the plaza, church courtyard or in the street.

Christmas wouldn’t be complete without the bright red poinsettia plants seen everywhere at this time of year.  Native to Mexico and known as cuetlaxochitl, or Christmas flower, poinsettias are often seen in pots, but also grow as bushes or tall trees, blooming in December.  The red colour is from the upper part of the leaves while the actual flowers are the small yellow buds seen on the plant. 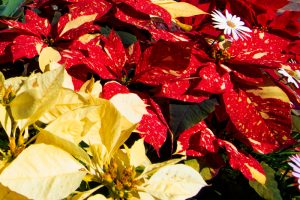 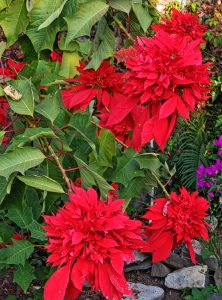 There is a Mexican legend that tells of a young girl who was too poor to provide a gift to baby Jesus on his birthday and therefore was reluctant to attend church on Christmas Eve. It is said an angel appeared to her and told her to pick weeds from the roadside and take them to the church.  The girl did as she was told and placed the weeds at the front of the church where they bloomed into a beautiful red plant that we know today as the poinsettia and is seen in many parts of the world as a symbol of this magic time of year.

The four “P”s of Christmas traditions are all seen during the nine days of celebrations culminating on Christmas Eve here at Lakeside.

Everyone at Lake Chapala Real Estate wishes you and your family a “Feliz Navidad”.

Cohetes – the Noise of Life! 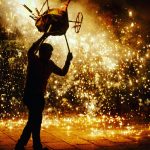 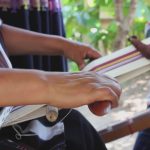