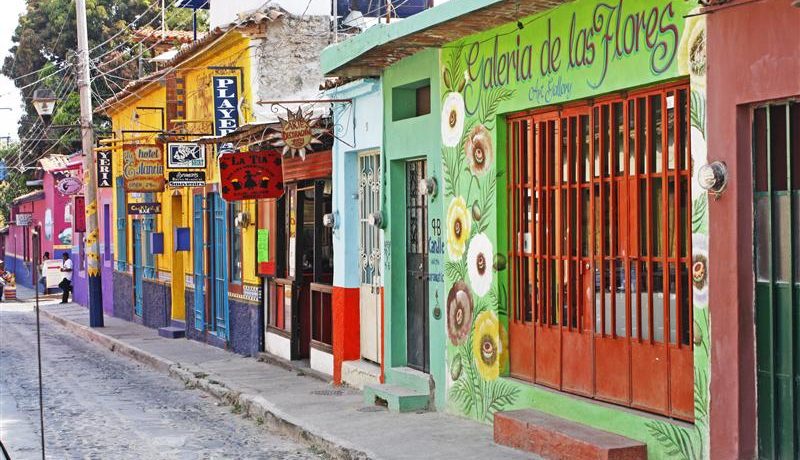 Ajijic (Spanish pronunciation: [axiˈxik] is a town about 3 miles (4.8 km) from the town of Chapala, part of the municipality also called Chapala, in the State of Jalisco, Mexico. Situated on the north shore of Lake Chapala, surrounded by mountains, Ajijic enjoys a moderate climate year-round. The population is around 15,000.

The Chapala Lake basin has a year-round average temperature of about 72 °F (22 °C). Due to Ajijic’s tropical latitude, the sun is warm year-round; due to its relatively high elevation, it is seldom unpleasantly hot or humid. The rainy season begins in June and lasts until October with an average rainfall of approximately 34 inches (860 mm). Even during the rainy season, precipitation generally occurs during the evening or at night.

Up until the arrival of the Spanish, the region was occupied by nomadic Indian tribes, probably the Cocas tribe that settled the northern shore. There seem to be many explanations, and meanings for the names Chapala and Ajijic, all of which are Indian place names, probably derived from Nahuatl, the native language of the area.

Ajijic’s population of 10,509 (2010 census) excludes the hundreds of visitors from Guadalajara (35 miles (56 km) north) who spend weekends and vacations there. Many retired Americans and Canadians now live in Ajijic, about 1,000 full-time and another 700 during the winter months. As a result of these foreign residents and visitors, Ajijic has numerous art galleries and curio shops, as well as restaurants and bed and breakfast inns. The Lake Chapala Society in central Ajijic has about 3,000 mostly foreign members. It serves as a focus of expat activities for the nearly 5,000 foreign residents who live around Lake Chapala.

American writer Dane Chandos settled in Ajijic before World War II and wrote two books about life there: Village in the Sun (1945, G.P. Putnam’s Sons), which concerns his efforts to build a house on the edge of the lake, and House in the Sun (1949), which concerns his operation of a small inn in the house. They were written when the main road was unpaved, ice was delivered by bus from Guadalajara, and electricity was just being installed.