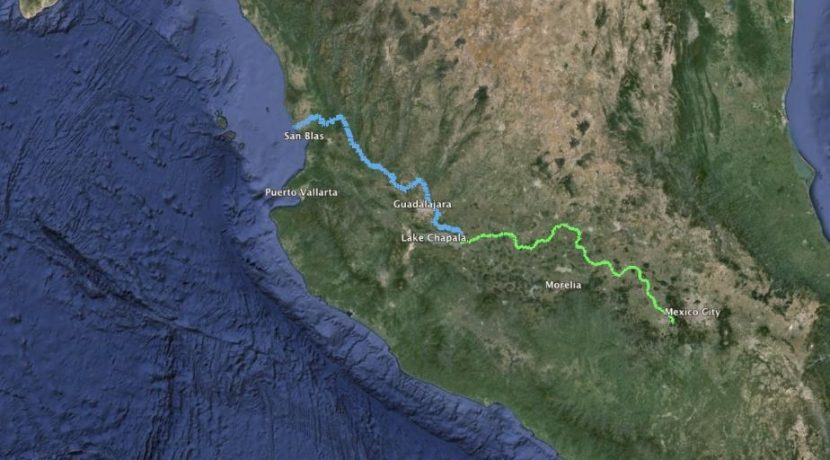 The Lerma River (Spanish: Río Lerma) is Mexico’s second longest river. It is a 750 km-long (470 mi) river in west-central Mexico that begins in Mexican Plateau at an altitude over 3,000 metres (9,843 ft) above sea level, and ends where it empties into Lake Chapala, Mexico’s largest lake, near Guadalajara, Jalisco. Lake Chapala is the starting point of Río Grande de Santiago, which some treat as a continuation of the Lerma River. In combination, the two are often called the Lerma Santiago River (Spanish: Río Lerma Santiago). The Lerma River is notorious for its pollution, but the water quality has demonstrated considerable improvement in recent years due mostly to government environmental programs and through massive upgrading projects of sanitation works.

The Lerma River originates from the Lerma lagoons near Almoloya del Río, on a plateau more than 2,600 metres (8,500 ft) above sea level, and 24 kilometres (15 mi) southeast of Toluca. The lagoons receive their water from springs rising from basaltic volcanics that flow down from Monte de Las Cruces. These are located between the Valley of Toluca and the Basin of Mexico.

Some people consider the 400-kilometre (249 mi) long Río Grande de Santiago, which continues from Lake Chapala northwest towards the Pacific Ocean, to be a continuation of the Lerma River.

During the 17th and 18th centuries, large haciendas were established along this river, including the Atenco ranch, which was founded with bulls that belonged to Hernán Cortés. The bulls from this area are considered some of the finest stock for bullfighting. The river is dotted with cities such as Lerma, México and San Mateo Atenco to small picturesque villages with cultural significance such as Malinalco.

The Lerma River–Lake Chapala basin is considered to be the most important watershed in the country by the federal government. With its major tributaries, the Laja, Apaseo, and Turbio the Lerma constitutes Mexico’s largest river system. The Lerma River is not navigable by water craft, but it is critical to regional agricultural irrigation. In the Lerma River/Lake Chapala watershed, 52,125 of the total 78,000 (roughly 67%) farmers are classified as small farmers. Currently 820,000 hectares are irrigated and an estimated three million hectares are in agricultural production.

The population in the watershed as of 1997 was 9.35 million with an annual growth rate slightly less than the national average. The population is distributed among 6,224 localities; 18 of these have a population greater than 50,000 inhabitants. The rural population is currently 32 per cent. The Lerma’s water is also a source for the municipal water supply in the Guadalajara and Toluca metropolitan areas. While water extraction and use has been adequate for the region’s larger population centers, rural areas have had chronic problems with access to potable water from the river and the aquifers that feed it. Wells drilled into these aquifers have very low yields.