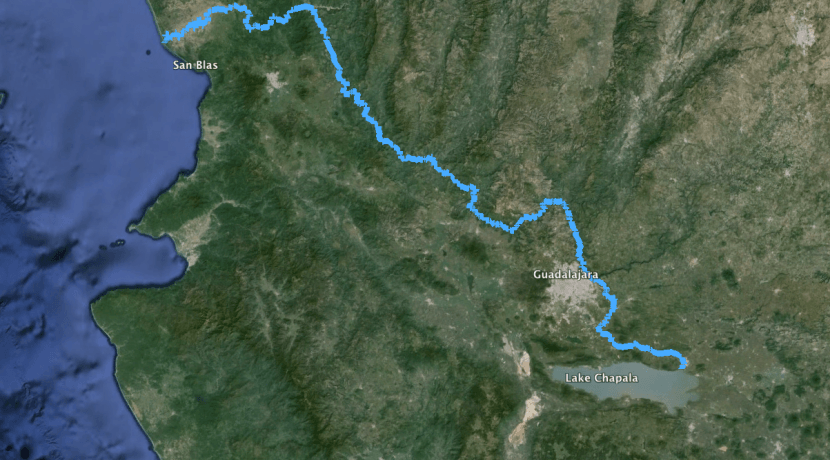 The Grande de Santiago river (also, Santiago mesuring or simply Santiago ) is a river that is located in the West of Mexico . Born in Ocotlan , on the shore east of Lake Chapala , at an altitude 1524 meters , and runs through the states of Jalisco and Nayarit , demarcating its border along about 30km. His wealth flows to the side of the metropolitan area of Guadalajara and empties into the Pacific Ocean (near San Blas , Nayarit ). Its route is 562 km and drains a basin of 76 400 km². It contains the dams: El Cajon (2007), Aguamilpa (1994) and Santa Rosa (1964), the regulatory dam San Rafael and dam derivadora The Gileno.

For its runoff annual average is considered the second river in importance of the Mexican Pacific; its basin covers an area of 72,427 sq km 2 and covers parts of six states: Aguascalientes, Durango, Guanajuato, Jalisco, Nayarit and Zacatecas .

More than 7.5 million people live in this basin, most concentrated in the metropolitan area of Guadalajara. Industrial development is also concentrated in the same area, extending to the river Santiago Ocotlan. According to CONAGUA , the regions of the Valley of Mexico , Balsas , Lerma-Santiago and some Gulf central sites represent the most polluted regions.

The origin of this river is in the river Lerma that has its origin in the State of Mexico, happening in turn by the states of Guanajuato, Michoacán and is united in the lagoon of Chapala in Jalisco to the river Santiago. It can be considered one, since previously Lerma did not pass through Chapala, but surrounded it according to count inhabitants of its cienega, until a storm of rains expanded the coast chapalico.

Shortly after leaving the Lake Chapala passes Ocotlan, and shortly before passing near Guadalajara forms the waterfall or jump Juanacatlán among the population of the name and El Salto, 15 m high and 130 m wide. It is here where it begins to form a series of ravines, which extends to almost leaving the Sierra Madre Occidental. Then passes through the dam Santa Rosa, shortly after passing 6 km of Tequila, where it is known as Lerma-Santiago.

In Nayarit, before passing near Tepic (47 km in straight line), it is the curtain of the dam El Cajon. It downstream, about 60 km, will reach the dam Aguamilpa (opened in 1997) and then to the village of Yago, and later by Santiago Ixcuintla. Empties into the Pacific Ocean in Nayarit, 21 km northwest of San Blas (in the state), creating extremely fertile areas suitable for agriculture.

It has numerous tributaries, among which are: the Green River (Jalisco), the Juchipila River (Zacatecas), the Huaynamota River (280 km in Nayarit) and the Bolaños River (360 km in the state limit) among others (The four tributaries on the right bank).

From the Presa Santa Rosa until the beginning of glass of the dam Aguamilpa runs predominant direction northwest, then turn southwest.