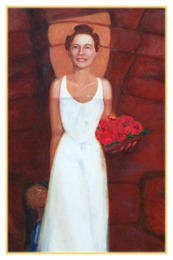 In order to tell you about the Lake Chapala Society (LCS), I must first tell you about Neill James, Ajijic’s “Fairy Godmother,” and the benefactress of the LCS, located in the heart of Ajijic, which is home to the largest expatriate society in the world.

She is a woman I would have dearly loved to know and so I hope I can convey just a bit of the spark that made her one of the most fascinating heroines I have ever had the pleasure to read about.

Neill James was a person after my own heart. Born on a cotton plantation in Mississippi, she was a well-educated woman who was a world-renowned travel writer. Briefly married and then divorced with no children, she became a fearless adventurer, fascinated by flying after she met Amelia Earheart.

Neill survived a disaster that brought her to Ajijic, which became, perhaps, the best thing that could have happened to her or Ajijic:

Neill James was exploring Michoacan, Mexico in 1941 where she had two close calls with volcanoes. But it was on the slopes of the Paracutin Volcano, located near Pátzcuaro, that Neill became badly injured. Neill had fallen and broken her leg while climbing Popocateptl. Later, while still on crutches, she was visiting Paracutin when the shelter she was staying in collapsed on top of her from the weight of accumulated ash.

As Neill ruefully put it, “I fell on Popocateptl; Paracutin fell on me.”

Neill was rescued and had to be carried down the volcano; providentially she was brought to Ajijic in 1943 (safely away from volcanoes) to recuperate for a year. It was during this time that she fell in love with Mexico and her people and they fell in love with her. Thus began a love affair that was to last for many generations.

Neill believed in helping the Mexican people to help themselves; a philosophy that is carried on today at the LCS through their scholarship program for students, ESL classes (English as a Second Language), computer classes and the Children’s Art Education program, which is probably Neill’s most enduring legacy.

Her patronage has paid off handsomely. For six decades now a steady stream of gifted children has passed through those classes and an amazing number have gone on to successful careers as professional artists. Most of the galleries which line the streets of our village are either owned by, or display the work of, those former students.

A haven for artists, writers, sculptors, jewelry-makers and other artisans, the international focus she placed on art in Ajijic can still be seen today.

When Neill would travel to another country, she would pick up rare plants and bring them “home.” Today, the lush garden at LCS is still filled with some 200 varieties she personally planted.

Neill opened the first libraries for the children in the area and she also taught cooking classes to local Mexican women. Neill went on to develop a water purifying system and helped install both electricity and the telephone, discovered gold in the caves in the mountains above Ajijic, and she set up schools for the local children’s education.

The Lake Chapala Society was founded in 1955 as a cultural, social and benevolent society by Neill James and a group of 21 adventurous expats living in Ajijic. Later, Neill bequeathed her village home to the LCS. She made a deal with the LCS that she would leave them the house as long as she could live there until her death and they would take care of her in her old age. Getting her money’s worth, Neill died in 1994, just a few months shy of her 100th birthday.

Fifty-plus years later the society has grown to approximately 4,000 members that mostly comprise expatriates from the United States and Canada. To take advantage of their services, you must become a member.

Daily activities range from information sessions about immigration, insurance, health care services along with a myriad of clubs such as bridge, computer, investment and, of course, Spanish classes.

The English language library has approximately 28,000 volumes and the video library offers 2500 VHS videos and DVDs on loan to participating members, as well as books on tape.

Membership dues are $600 pesos for a family or $400 pesos for a single per year, which includes a copy of the members’ telephone directory. Volunteers provide most of the Society’s services. It is a great place to sit and enjoy the gardens and the friendship of other expatriates.

The benefits of becoming an active member of the LCS are: