Standing proudly on the Ajijic malecon, the creative Ajijic sign with the stunning backdrop of Lake Chapala and Mount Garcia, skillfully depicts the various facets of life in this area. The flora, the architecture, food, art, the lake and the ever-present music are all part of the ambiance that makes Ajijic an enchanting place to live. 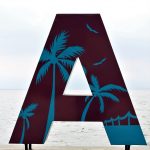 The A sign represents the flora of Lake Chapala, where palm trees grow in abundance next to evergreens, fruit trees alongside climbing vines. There are always some kind of flowers in bloom, each according to their season and it seems there is no end to the variety of colours. Hanging over walls, lining streets, growing abundantly behind the walls –  you may be lucky to catch a peek of a beautiful garden as you walk past an open gate.  Mexico is the world leader in the number of cactus species and many of them are found here in the Lake Chapala area. The fertile soil of Lake Chapala makes it easy to grow plants all year round. As the saying goes  – “stick a toothpick in the ground here and a tree will grow! ” 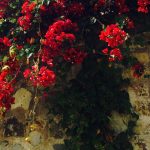 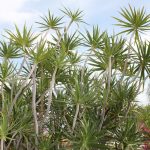 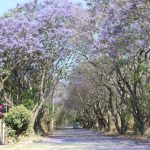 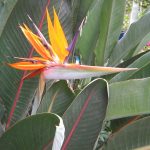 The church seen on the J letter is a depiction of the San Andres church of Ajijic. Situated a block from the central plaza, this lovely church was built in the early 1750s and is the centre of village life. The smaller stone church at the northwest corner of the Ajijic Plaza, the Chapel of Our Lady of the Rosary, is still in use during fiestas and Sunday mass for the English speaking community. Throughout the Lake Chapala area, as in the rest of Mexico, the main religion is Roman Catholic and the church is the centre of local life. There are also several churches of various denominations to be found Lakeside, many of which hold English speaking services to serve the ex-pat community. 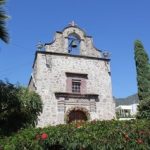 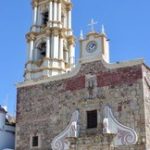 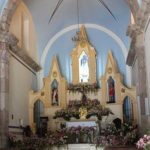 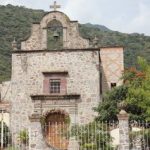 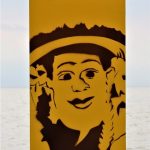 Fiestas and Food  – a central part of life in Ajijic, is portrayed here on the first I letter. There are numerous restaurants and cafés to choose from at Lakeside, with far more choice than you may expect from an area this size. Featuring international cuisine as well as traditional Mexican foods, from fine dining to casual eateries and taco stands to tempt your palate!

Fiesta is symbolised on the sign by the sayaca  – a mask worn by men dressed as women as part of the Fat Tuesday parade (Mardi Gras), which takes place in February each year.  There is a fiesta (or two) for almost every month of the year, some have a religious significance while others are for sheer revelry. 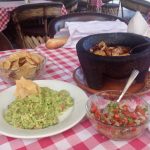 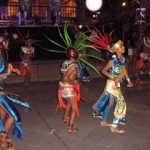 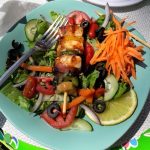 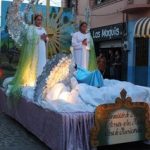 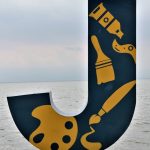 Ajijic may be best known for its art and artists  – represented on the second J letter. Initially known as an artist’s colony, the village has continued to produce and foster artists of all ages and genres. Some of Mexico’s most famous artists have their roots in the lake Chapala area. Art is all around us here – on walls and sidewalks, doors and windows, in restaurants and stores. Painting, sculpture, pottery, weavings, jewellery – everywhere a feast for the eyes and soul. A celebration of indigenous art takes place at the annual Fiera de Maestros, featuring artists who travel from all over Jalisco to bring their unique crafts to the Fiera. The event takes place in February and is a great opportunity to acquire a piece of truly authentic Mexican art. 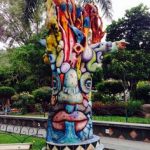 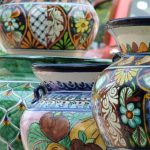 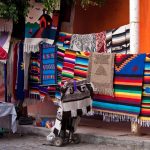 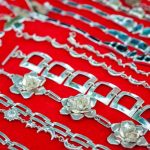 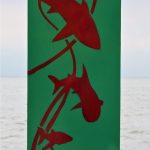 The second I letter shows fish that represent Lake Chapala, which contains mostly charales, carp or tilapia. Fishing has been an important economic activity for the local fishermen of Lake Chapala and fish caught in the early daytime hours can be found for sale in the local markets.

Many years ago the water level was extremely low which allowed for farming on the lakebed. Countless fences and other obstructions remain in place, therefore restricting water sports or motorboat activity in certain areas of the lake.

The stunning sunsets and sunrises over the lake, relaxing walks on the malecon, bustling weekend activity with the mountains all around, are what make the beautiful lake so attractive while maintaining the marvellous micro-climate of Lake Chapala. 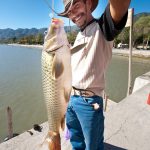 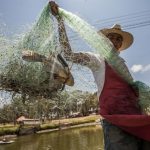 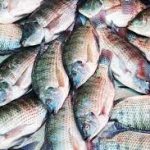 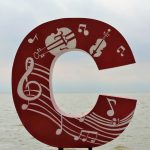 Music as signified here on the C letter, is an integral part of Mexican life and as the state of Jalisco is the birthplace of Mariachi, the distinctive performance style and sounds of mariachi bands can be heard any day somewhere at Lakeside. The original Mariachi groups consisted of stringed instruments only and the players dressed in typical peasant clothing of white trousers and shirt. The addition of trumpets came later as well as the charro outfits worn by the musicians today. A typical mariachi band now consists of several violins, two types of guitars and 2 or more trumpets.

Numerous other genres of music are available for your listening pleasure at several venues, from bars to auditoriums.  Jazz, rock, symphony, choral, country to name just a few – take your pick! 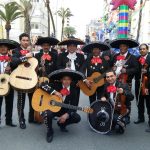 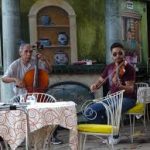 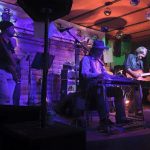 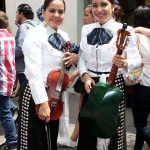 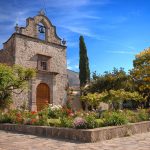 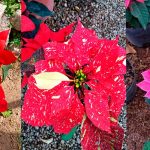